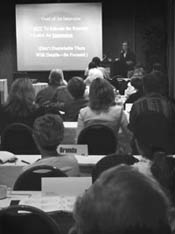 Given the amount of eminent domain abuse occurring nationwide, it was only a matter of time before the Castle Coalition took its activist conference on the road.

Since its inception, the Castle Coalition has held an annual conference in the nation’s capital to train home and small business owners in the techniques necessary to stop the government from taking property from one private individual and handing it to another. But the reach of this event was limited and did not meet the boundless need for more information and instruction.

A main component of the “Hands Off My Home” campaign, launched in the wake of the U.S. Supreme Court’s infamous Kelo decision, was to hold regional activist conferences. Building on our well-attended session in Newark, N.J.—which included activists from Connecticut, Pennsylvania and New York as well as the Garden State—we have held conferences in Arizona, Washington and Florida. We are currently planning conferences in California, Missouri and Ohio—all states needing educated activists and serious eminent domain reform.

The regional conferences are modeled on our national conference, providing attendees with instruction on such topics as building grassroots coalitions, media relations, preparing for legal action and initiating legislative reform. In addition, participants can share their stories and lay the groundwork for statewide coalitions to end eminent domain abuse.

In a few short months, we will have tripled the number of conferences we hosted prior to the Kelo decision and added hundreds of new members to the best-trained group of activists in the country. With their help, we will continue fighting to keep the government’s hands off our homes.Steven Anderson is IJ’s Castle Coalition coordinator.