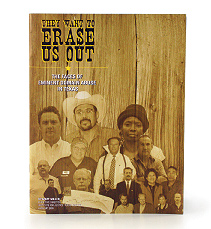 IJ has a proud history of being positive and action-oriented. That tradition is demonstrated by a report from the Texas Chapter that strategically targets state legislators who are—once again—debating eminent domain reform in the 2009 session.

Eminent domain abuse is unfortunately alive and well in Texas. Soon after we opened the IJ Texas Chapter in June of 2008, we began hearing from property owners across the state who are being threatened with eminent domain for private gain. This is not happening in small, out-of-the-way places. It is happening in three of our largest cities—El Paso, San Antonio and Houston.

As we began working with local activists who are fighting these redevelopment projects, it became clear that we needed to share their stories with the Texas Legislature, which is once again considering major eminent domain reform—including a possible constitutional amendment—to address the problem. That realization prompted us to write They Want to Erase Us Out: The Faces of Eminent Domain Abuse in Texas.

The report paints a portrait of Texans who are faced with losing their homes, businesses and livelihoods to redevelopment projects cooked up by big developers and local officials—the classic Kelo story. It begins in El Paso, where the city and a multi-national development consortium plan to demolish and remake a 133-acre neighborhood between downtown El Paso and the Mexican border.

“I’m going to be put out of business, not because I’ve made a mistake in the way I run my business. I’m being put out of business by the government,” said Gil Kimmelman, who owns two clothing stores and a warehouse in the demolition zone.

Something very similar is happening in San Antonio. There, the city wants to expand its famous River Walk tourist attraction northward. Standing in the city’s way are dozens of homes and businesses, including Texas’s oldest Cadillac dealership, Cavender Cadillac. Billy Cavender was mighty surprised when he saw that the city of San Antonio had replaced his Cadillac dealership with a grocery store in its plan for the area.

Billy said, “They did an artist rendering of our facility with their future ideas of a marketplace taking our facility and creating high density in this area. I guess they thought we were going to be a grocery store—not a Cadillac dealership anymore.”

Arbitrarily expropriating existing businesses represents the arrogant mindset that permeates most redevelopment plans. In Houston, Metro (the mass transit authority) has the power to condemn anything within a quarter-mile of any planned light rail station to promote something called “transit-oriented.”

The concept includes condos, coffee shops and all sorts of things that have nothing to do with true public use and everything to do with benefiting private developers at the expense of existing property owners.

“It’s going to be a nightmare,” said Paul Magaziner, whose business is threatened by Metro’s plans.

Erase Us Out is filled with the stories of ordinary Texans like Gil, Billy and Paul who are living in the crosshairs of eminent domain abuse. We decided that telling their stories would send a powerful message to the Texas Legislature: ordinary Texans are fighting for their rights; let these stories motivate you to finally push genuine eminent domain reform across the finish line in Texas.

A PDF copy of this report is available at www.ij.org/EraseUsOut . It is also available from Amazon.com for Kindle e-book readers.

Matt Miller is executive director of the IJ Texas Chapter and the author of ‘They Want to Erase Us Out: The Faces of Eminent Domain Abuse in Texas’.