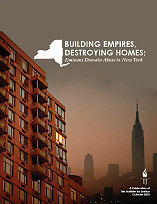 New York does absolutely everything wrong with regard to eminent domain. Its laws are hopelessly stacked against property owners. It is one of only seven states in the entire country that failed to pass any eminent domain reform in response to the U.S. Supreme Court’s infamous decision in Kelo v. City of New London. For years, New York’s lower courts turned a blind eye to the enormous benefits afforded to private developers, outrageous behavior on the part of government officials, and even blatant evidence that the projects would be miserable flops.

On November 24, 2009, New York’s highest court—the Court of Appeals—had an opportunity to change all that. And instead, it decided to make things even worse, solidifying New York’s status as the absolute worst state in the entire country for eminent domain abuse.

The case—Goldstein v. New York State Urban Development Corporation—challenged the plan to use eminent domain to hand over privately owned businesses and homes in Brooklyn to private developer Forest City Ratner as part of the Atlantic Yards development project to create a new arena for the New Jersey Nets and other surrounding private development. IJ submitted an amicus brief explaining to the court that this was New York’s opportunity to follow the lead of the high courts of Hawaii, Missouri, New Jersey, Oklahoma, Ohio, Pennsylvania and Rhode Island, which all have begun imposing greater judicial scrutiny and rejected proposed condemnations as not for public use. Instead, New York issued what can only be called a shameful opinion, punting on all the major issues.

The court decided to simply accept the condemning agency’s assertions—if the government said it was for public use, then the court would not get involved. The majority’s opinion frankly acknowledges that its decision opens the door to “political appointees to public corporations relying on studies paid for by developers . . . [as] a predicate for the invasion of property rights and the razing of homes and businesses.” But, it says, preventing such abuses is not the job of the courts, advising New Yorkers to look to their legislature to fix any problems.

New Yorkers must fervently hope that their legislature decides to do something, because eminent domain abuse in New York is completely out of control. At the same time that it filed its amicus brief, IJ released its statewide analysis, Building Empires, Destroying Homes: Eminent Domain Abuse in New York, which shows just how badly New York agencies have been abusing their power.

As Building Empires explains, “Over the past decade, a host of government jurisdictions and agencies statewide have condemned or threatened to condemn homes and small businesses for the New York Stock Exchange, The New York Times, IKEA, Costco, and Stop & Shop. An inner-city church lost its future home to eminent domain for a commercial development that never came to pass. Scores of small business owners have been threatened with seizure for a private university in Harlem and for office space in Queens and Syracuse. Older homes were on the chopping block near Buffalo, simply so newer homes could be built. From Montauk Point to Niagara Falls, every community in the Empire State is subject to what the courts have accurately called the ‘despotic power.’”

The Associated Press reported that IJ documented how New York is “‘a hotbed of abuse,’ with 2,226 properties statewide either condemned or threatened with condemnation through eminent domain in the past decade to allow for private development.”

There is one glimmer of hope in the courts—an appellate decision rejecting the condemnation of private businesses for Columbia University. Nonetheless, after the Court of Appeals decision in Goldstein, the New York courts certainly cannot be counted on to protect the rights of their citizens.

IJ and the Castle Coalition have worked for years to reform New York’s eminent domain laws and defeat individual projects. We won a legal victory in the Brody case, which vindicated the rights of a New York property owner, and helped defeat a number of eminent domain projects across the state, but what is needed now is systemic legislative reform that will protect New York property owners and renters once and for all. After the latest decision from the Court of Appeals, IJ will continue to fight until all in the Empire State are free from eminent domain abuse.