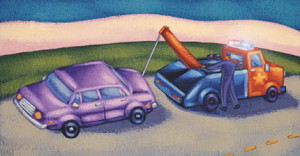 Civil forfeiture laws repre sent one of the most seri ous assaults on private property rights in the nation today. This legal doctrine allows the government to file lawsuits against pieces of property under the notion that property can be used to “facilitate” illegal activity and can therefore be “guilty” of a crime.

The Institute has filed amicus briefs in civil forfeiture battles at the U.S. Supreme Court for a number of years, but now we are lead counsel in a New Jersey forfeiture battle that epitomizes the abuse of these laws. The case provides an exciting opportunity to challenge what often drives forfeiture abuse: the direct financial incentive in forfeiture laws for law enforcement to maximize the number of property seizures.

The New Jersey case unfortunately represents an all-too-typical abuse of forfeiture laws, with some interesting twists. The case is entitled State of New Jersey v. One 1990 Ford Thunderbird. (Civil forfeiture cases usually have such bizarre case names, like United States v. $10,500 in U.S. Currency; State of California v. Two Parcels of Land, etc.). Although technically we represent the car in the case (a first for the Institute), in actuality, we defend Ms. Carol Thomas of Millville, New Jersey, the owner of the T-Bird.

The case arose when Thomas’s 17-year old son used her automobile to sell marijuana to an undercover officer. He was arrested and eventually pleaded guilty to the charge, but that did not end the matter. In addition to pursuing the criminal case against her son, the government also pursued Ms. Thomas’s car in a civil proceeding even though she is the sole owner; no drugs were found in the car; and she unquestionably was not aware of and did not consent to her son using her car to sell marijuana. Under New Jersey forfeiture law, the government can still bring the action because of the legal fiction that the car itself is guilty of the crime, because it was used to facilitate illegal activity.

Thomas’s profession at the time of her son’s arrest will surprise you. She was a seven-year veteran officer with the Cumberland County Sheriff’s Office. During that time, she had actually served on the county’s narcotics task force, the same unit that arrested her son and seized her car. Thomas has subsequently left the sheriff’s department and has decided to fight abusive forfeiture laws.

Forfeiture laws have been described as Alice-in-Wonderland-like procedures, with the government having all the advantages. New Jersey’s forfeiture law is no exception. After seizing property, the State of New Jersey, working with the county governments, must file a lawsuit against the property within 90 days. The property owner must respond within 20 days claiming ownership of the property. If the owner doesn’t respond within the requisite time period, the property is automatically forfeited to the government. In the forfeiture proceeding itself, the State can prove by a mere “preponderance of the evidence” that the seized property was somehow connected to unlawful activity. Civil forfeiture is permitted even where criminal charges have never been filed against a property owner or where charges have been dismissed. Proof of criminal activity by the property owner or anyone else is not required under New Jersey’s law.

Also under New Jersey law, forfeited property and proceeds must be given to law enforcement agencies for their exclusive use. Seizing and prosecuting agencies are thus granted a direct and significant financial stake in the outcome of forfeiture efforts, encouraging the agencies to seize as much property as possible. In one recent six-month period, New Jersey law enforcement agencies alone secured forfeiture of $2.49 million dollars in cash and 34 vehicles worth over $300,000. The proceeds were used for such things as: $373,000 for “Asset Maintenance”; $244,967 for the purchase of ten vehicles and other equipment for the State Division of Taxation, Office of Criminal Investigation; and $60,000 for “Confidential Purposes.” Not surprisingly, officials tend to stretch the definition of what constitutes “law enforcement.” For instance, New Jersey county prosecutors and the state attorney general spent over $500,000 in forfeited funds over a three-year period for prosecutor conventions, including $2,800 spent to hire Mr. Peanut to greet prosecutors and their families at the Trump Regency ballroom. Captain Steve Terry of the Atlantic County Prosecutor’s Office explained the expenditure: “You can’t expect these people to come to Atlantic City and not be greeted by Mr. Peanut.”

The direct financial incentives at the heart of forfeiture dangerously transform law enforcement from the administration of impartial justice to the pursuit of profit and property. Not only does this scheme pervert law enforcement’s responsibility to enforce the law fairly (as opposed to bounty hunting), it often sweeps up wholly innocent individuals, like Ms. Thomas, in forfeiture proceedings.

Such schemes also raise serious constitutional concerns. Fundamental to the Constitution’s due process guarantee is that the government act in an impartial manner in the administration of justice. The due process clause prohibits statutory schemes, like New Jersey’s civil forfeiture law, that create actual bias, the potential for bias, or even the appearance of bias in the administration of justice.

A decision striking down direct profit incentives for law enforcement in civil forfeiture would radically reduce the incidence of abuse and dramatically increase the protection for property rights of individuals faced with civil forfeiture abuses.