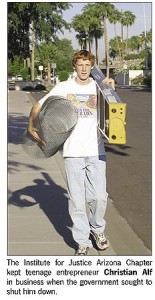 When roof rats invaded teenage entrepreneur Christian Alf’s hometown of Tempe, Ariz., he seized the opportunity to start a business helping neighbors protect their homes. Roof rats are adept climbers who make their homes above ground, particularly in attics. Christian, always prepared with his own ladders, tools and diamond stucco-mesh, began covering vents, pipes and other openings on roofs to keep out the nasty little rodents. He charged a flat rate of $30 a roof and had a mostly elderly clientele.

Christian’s high-quality work quickly caused demand to grow, ultimately landing him on the front page of the Arizona Republic’s local section in an article lauding his ingenuity and advertising his phone number. The article produced an avalanche of telephone calls—more than 200—seeking to hire him. It also garnered the attention of the Arizona Structural Pest Control Commission. Less than 24 hours after the newspaper article ran, a government agent was standing on Christian’s front door looking to shut him down for engaging in unlicensed pest control.

Christian may have been working to keep rats off of roofs, but he quickly discovered that the real rats sit in bureaucratic offices. Intimidated by the Pest Control inspector, Christian’s mom signed a statement promising that her son would stop work immediately. Upon learning of the State’s heavy-handed enforcement, the Institute for Justice Arizona Chapter (IJ-AZ) jumped into the fray.

This case was tailor-made for the court of public opinion. IJ’s Czar of PR, John Kramer, enthusiastically embraced the case, and with his help, Christian and IJ-AZ dominated headlines for weeks. Our letter to the Commission clearly spelled out the irrationality of the Commission’s actions. Christian was performing handyman work—he was not spraying pesticides or setting traps.

Ironically, it turns out that the industry’s “bible” says, when discussing rodent exclusion, that “in the normal course of pest control work, it is not always possible to do extensive rodentproofing.” It suggests that professionals educate homeowners about the importance of sealing openings. In other words, do it yourself or hire a neighborhood kid to do it for you.

The Commission ultimately buckled under the weight of public opinion, sending Christian a letter completely reversing its earlier position that his work constituted structural pest control. The letter concluded by wishing Christian “well in his future endeavors.” We too wish him well. And we say “thanks” for helping expose the real rats.

Tim Keller is a staff attorney at the Institute for Justice Arizona Chapter.