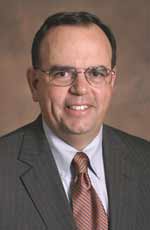 For those at the Institute for Justice, Executive Director Lee McGrath’s outstanding legal and leadership skills have long been apparent. And with his ubiquitous appearances in the media, in the courthouse and in the state legislature as the spokesman for economic liberty and eminent domain reform, among other issues, it was inevitable that McGrath’s talents would be noticed.

On March 27, 2006, Minnesota Lawyer Magazine honored Lee as one of the state’s top 15 new lawyers. Among the criteria used to select the honorees were bar activities, public service work, winning complex or difficult cases, rising to a leadership position and demonstrating great promise. There is no doubt that each of these factors weighed heavily in Lee’s favor. As a designated “Up and Coming Attorney for the Year of 2006,” Lee and the Institute for Justice appropriately share honors with a select few lawyers who are associated with the most prominent law firms in the state.