IJ Puts Eminent Domain on the Ropes in National City

IJ Puts Eminent Domain on the Ropes in National City 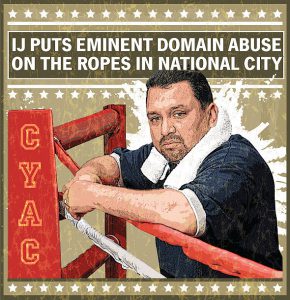 As the Rocky movies taught us, it doesn’t matter where things stand after the first round, it’s who’s left standing at the final bell that counts. In the three-and-a-half-year slugfest between IJ client Community Youth Athletic Center (CYAC) and National City, Calif., only the underdog was still on his feet when the judge issued his post-trial judgment on April 20, 2011.

As Liberty & Law readers know, the CYAC is a nonprofit boxing and mentoring center for at-risk kids in downtown National City just south of San Diego. What started with a punching bag hanging in the backyard of the CYAC’s founders—father and son team Carlos Barragan Sr. and Jr.—grew into a flourishing and effective anti-gang program and alternative school that owns its own land.

Unfortunately, like most property in National City, the CYAC is in the middle of a massive zone that has been declared blighted. And, in 2005, National City promised the gym’s land to a luxury condo developer.

There is an entire industry of politicians, bureaucrats, consultants, developers and bankers who feed off of endless blight designations, and they have no incentive to do anything but engage in exactly the sort of arbitrary central planning that perpetuates the social and economic problems they purport to be solving.

IJ teamed up with the CYAC back in the spring of 2007 to oppose the reauthorization of eminent domain. Unsurprisingly, despite being informed by IJ that its proposal violated statutory and constitutional law in literally dozens of ways, and despite enormous public opposition, National City rammed the new eminent domain ordinance through. The city didn’t seem to care that what it was doing was illegal because everyone knows that you can’t fight City Hall.

For the CYAC, it was time to do what they have been teaching their kids all along: have the courage to fight for what’s right, no matter the odds. IJ and the CYAC filed suit in September 2007, and we were knocked down at the opening bell. Exploiting a bizarre technicality in California law, the original judge dismissed the case on the ground that a notice in the back of a newspaper gave a certain date as a Friday when it should have been the following Monday. Not only did the judge toss the suit, he ruled that the CYAC could not correct the error. The case was over, and National City probably thought that it had scored a first-round knockout.

We picked ourselves up, wiped our bloody nose and took National City to the Court of Appeal for round two, where we not only got the trial court reversed, we secured an important precedent protecting property owners from silly technicalities when trying to protect their land.

Suddenly looking a little worried, National City then tried to dazzle us with a few rounds of fancy footwork, doing everything possible to prevent the truth from coming out. First they tried to get the case dismissed again on the same technicality. Then they refused to turn over any evidence in discovery, raised every possible objection and tried to prevent nonparties from giving documents to the CYAC. As all of this jumping, dancing and swinging away transpired, IJ patiently stood in the center of the ring, waiting for National City to get close enough, and then it was pow, pow, pow in a series of judicial decisions instructing National City to go forward with the lawsuit, turn over documents, and prepare for trial.

As we headed into trial in March, we entered what fighters call the “deep water” of the later rounds, where you find out if you’ve done the training and got the heart to go the distance. We had to dig really deep. Even though we’d rocked National City badly, and even though we had right on our side, going up against the government in a property rights case is always a long shot.

Trial was nothing short of an ordeal for IJ’s five-person crew: the two of us, Staff Attorneys Dan Alban and Doran Arik, and Paralegal Kyndra Griffin. We also had amazing help from our local counsel, Rich Segal, Brian Martin and Nate Smith of Pillsbury Winthrop. We spent weeks in San Diego working virtually around the clock. There were lots of opportunities to quit, to cut corners, to give just enough instead of giving our best, but no one faltered in the face of intense stress, the expectations of our clients, the importance of the rights we were fighting for and the loneliness we all felt for our loved ones back home. We had to solve small problems on the fly and make split-second decisions during trial that could cost us everything if not correct, but time and again the entire team did what it took to take the CYAC’s fight to the city.

With the roar of the crowd behind us (our side of the courtroom was packed every day, while National City had no one), we delivered our closing arguments in a flurry of body blows, upper cuts and crosses that left National City in a heap on the canvas. The judge agreed, ruling that National City violated state redevelopment law, the U.S. Constitution and the California Public Records Act. The entire 692-property eminent-domain zone was struck down.

There were two notable firsts in our victory. This was the first decision applying the reforms that California passed as part of the property rights reform movement that IJ spearheaded following the infamous Kelo decision. Our win confirmed that California property owners have heightened protection against bogus blight designations. This was also the first decision clearly holding that documents produced by government contractors—in this case, private blight consultants—were public records subject to disclosure under the Public Records Act.

So IJ and the CYAC are excited to give a big “Yo Adrian” to property owners across California. And if National City wants a rematch in the Court of Appeal, we have only three words for them: Bring it on.