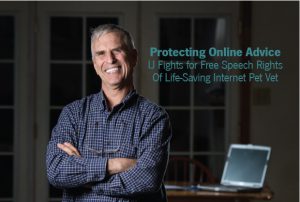 IJ client Dr. Ron Hines wants to provide vet consultations over the Internet across the globe, but the Texas Veterinary Board wants to bar him from that practice.

Dr. Ron Hines is a Texas-licensed veterinarian who is semi-retired and disabled due to an on-the-job accident. For more than a decade, he has used the Internet to give advice to pet owners around the world to help them solve vexing pet health problems. He sometimes charges a small fee, which helps him screen the volume of inquiries and has never earned Ron more than $2,400 in a year, and he sometimes gives advice for free. For some pet owners, particularly those in remote parts of the world, Ron is the only veterinarian to whom they have any access.

Last year, the state of Texas told Ron he had to stop helping people through his website, even though no one has ever complained about Ron’s advice. The government sent Ron a letter informing him that he was unwittingly operating a criminal enterprise by giving veterinary advice over the Internet. He was ordered to shut down his site, pay a $500 fine and had his license put on probation for a year.

In Texas, it is illegal for veterinarians to give veterinary advice through electronic means unless the veterinarian has personally examined the animal. This is the case even if the in-person examination has nothing to do with the advice being offered. But Ron cannot travel to Turkey, Belize or even California to examine the pets he discussed with their owners. Instead, he relied on information from the pet owners themselves and on records they provided, sharing his 30 years of veterinary insight and skills. In the eyes of the state of Texas, this made Ron a criminal, even though he is fully qualified to give advice.

The Texas law, like those in other states, helps protect brick-and-mortar veterinarians from disruptive technologies like the Internet. The profitability of those traditional veterinary practices has been under pressure as pet owners have availed themselves of new and less-expensive ways to obtain the help they need. What better way to protect an outdated business model than to get a law passed that eliminates your competition?

Fortunately, the Constitution limits the government’s ability to enact protectionist regulations. That is why Ron joined with the Institute for Justice to fight back and defend his First Amendment right to use the Internet to help people and their pets.

Veterinary advice is speech. As such, the First Amendment does not let Texas censor what Ron has to say to pet owners. This case raises an important and unresolved question under the Constitution: Does the First Amendment protect the right of licensed professionals to give advice over the Internet, or does the government’s limited power to license professions trump free speech?

Even though the Internet has become part of the daily fabric of American life, its rise has left open many unanswered questions in the law. As such, this case is bigger than Ron Hines. It is about protecting Internet freedom and free speech for Americans everywhere.

Matt Miller is the executive director of the IJ Texas Chapter.