Two million tourists annually come to Wisconsin’s lovely Door County for breathtaking lakeside views, water sports, cherry picking and much more. Unfortunately, one town there—Gibraltar—made Door County a little less lovely. In a fit of anti-competitive pique, Gibraltar banned restaurants on wheels, to the detriment of the town’s entrepreneurs and their customers.

Lisa and Kevin Howard, along with Jessica and Chris Hadraba, learned this the hard way. The quartet owns a family business named White Cottage Red Door in Fish Creek, an unincorporated area in Gibraltar. After opening their store, they wanted to open a food truck on their property to feed hungry campers. To that end, they got state and county permits for their truck. But the truck’s first customer, Gibraltar’s constable, told them to stop vending. Gibraltar’s board demanded that Door County revoke the truck’s zoning permit. And when the county refused, the board passed a total ban on vending goods from mobile vehicles, including food trucks.

The ban made no sense. White Cottage Red Door could sell cherry pie legally indoors at its brick-and-mortar store, but not at its truck parked a few feet away. But their truck met all of Wisconsin’s requirements for a safe restaurant. Indeed, the state even classifies it as a mobile restaurant. Nonetheless, Gibraltar stopped the truck’s owners from using their own property to grow their business.

That is because members of the town board feared food truck competition. The board’s former chairman owns a brick-and-mortar restaurant in Fish Creek. The board’s principal proponent of its ban works at another. And, after eating a food truck sandwich he called “out of this world,” a third board member cautioned that restaurants “should be up in arms.” But politicians should not be protecting restaurants’ profits from competitors’ sandwiches.

Fortunately, the Wisconsin Constitution acts as a check against towns trying to stack the deck in favor of industry insiders, and protects entrepreneurs’ right to earn an honest living. Gibraltar could ignore the state Constitution and stop White Cottage Red Door’s owners from supporting themselves on their own property.

In 2018, Lisa, Kevin, Jessica and Chris teamed up with the Institute for Justice to challenge Gibraltar’s vending ban. Gibraltar attempted to modify the ordinance to end the suit, but, in September 2020, a Door County Circuit Court judge ruled that both the ordinances violated Wisconsin’s Constitution. 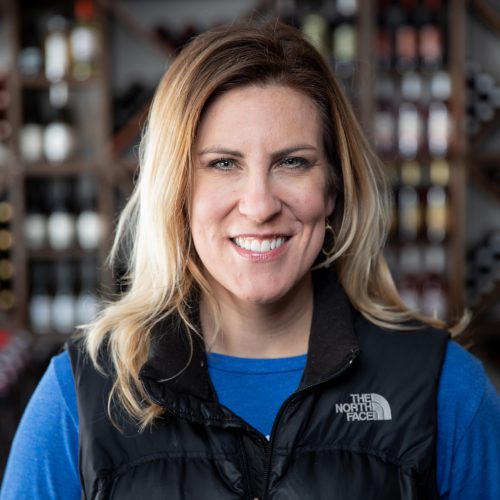 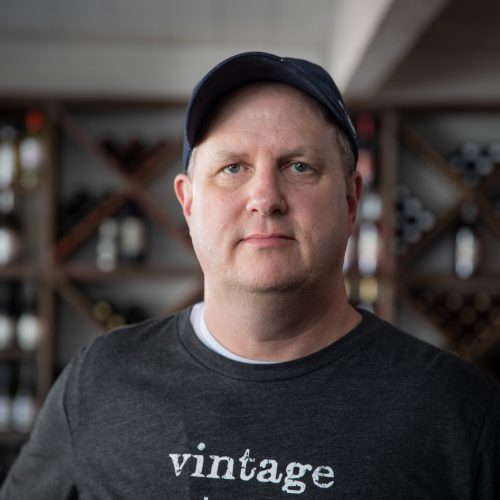 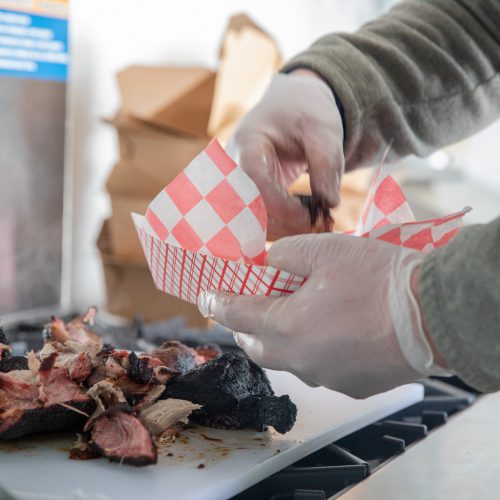 A family moves home to Wisconsin and builds a business together

Lisa, Kevin, Jessica and Chris are Wisconsinites through and through. Lisa and her brother Chris grew up in Wisconsin and found their soulmates—Kevin and Jessica, respectively—in state.

Years after Lisa married Kevin and Chris married Jessica, the quartet took a detour to Florida’s Marco Island. While there, Lisa and Kevin groomed dogs together at a pet resort with Jessica’s help. Meanwhile, a mile away, Chris cooked up some of Marco Island’s best burgers at a marina.

Though successful in Florida, Lisa, Kevin, Jessica and Chris longed to return to the Badger State. All four dreamed of opening a business together there, and Jessica and Chris wanted to come back home to raise their two kids.

Specifically, the quartet wanted to settle in Wisconsin’s picturesque tourist mecca—the Door Peninsula. Plenty of its visitors would surely understand why. Each year, 2 million people visit the peninsula for its stunning views along a 300-mile shoreline. Once there, they drink at its wineries, dine at its fish boils, rent boats and kayaks from its harbors, and pick cherries from its orchards.

Lisa, Kevin, Jessica and Chris realized their dream in 2016, when they moved to Door County and purchased a Fish Creek cherry orchard and historic market formerly called Ray’s Cherry Hut. Since 1950, the Cherry Hut had been a roadside store alongside Wisconsin’s Highway 42. Unfortunately, the Door County institution was in bad shape. Its old store and cherry trees were decaying from years of neglect.

Fortunately, Lisa, Kevin, Jessica and Chris breathed new life into the old property. After a year of elbow grease, sweat and renovations, they opened a new market called White Cottage Red Door. Given its stomping grounds, the store sells “everything cherry,” including cherry pies, cherry jam and cherry beer. At White Cottage Red Door, you can also get other specialty foods, fudge, wine tastings, and souvenirs like Wisconsin-shaped magnets and greetings cards depicting Door County.

For its owners, White Cottage Red Door is a labor of love. They enjoy working together as a family and complementing one another’s skill sets. Always-careful Lisa makes sure the business’s accounting and paperwork is in order. Confectionary-extraordinaire Kevin satisfies a visitor’s sweet tooth. Expert-marketer Jessica handles the store’s social media. It is no surprise that White Cottage Red Door’s brick-and-mortar business started strong.

But White Cottage Red Door’s owners were not done growing their business. Given Chris’s talents as grill master, they wanted to expand their store’s menu and offer customers burgers and other sandwiches. And they knew that some hungry campers on the move did not have time for a sit-down meal. So White Cottage Red Door added a state-licensed food truck on its property, a few feet away from its brick-and-mortar store.

Unfortunately, Gibraltar’s town board had other ideas.

White Cottage Red Door’s food truck opened for business in August 2017, but its owners soon got a rude surprise. The truck’s first customer—Gibraltar’s constable—said the food truck was illegal. After the constable left (with a bacon cheeseburger in hand), the town’s chairman showed up to give the truck’s owners another earful.

But White Cottage Red Door’s food truck satisfied all of Door County’s zoning requirements and Wisconsin’s food-safety rules. That is why the truck earned a zoning permit from the county and a mobile restaurant license from the Wisconsin Department of Agriculture, Trade and Consumer Protection. The owners even got an additional license from Madison regulators in order to use a barbecue smoker.

Since Lisa, Kevin, Jessica and Chris had played by all the rules, they were not worried. They showed Gibraltar’s town chairman their food truck’s zoning and mobile restaurant permits. When he left their property, they thought the town was done threatening them.

Unfortunately, Gibraltar was just getting started. Without notifying White Cottage Red Door’s owners, the town board held meetings about banning their food truck, with one board member breathlessly calling on the board to “protect the community from having this ever happen again.” And so, in September 2017, Gibraltar sent Door County’s zoning department a letter mistakenly saying that a 1982 town ordinance banned White Cottage Red Door’s food truck. The town’s letter went so far as to explicitly demand that the county retract the truck’s permit. The county refused to do so.

With Door County refusing to do the town’s dirty work, Gibraltar rewrote its entire vending law, all in an effort to shutter White Cottage Red Door’s food truck once and for all. In January 2018, the town banned the sale of food—or anything else—from any vehicle or cart located anywhere in Gibraltar. 1 In effect, it is a total ban on vending and, more broadly, a ban of sales on wheels.

Because of this ban, White Cottage Red Door’s food truck is now closed, to Gibraltar’s detriment. No longer able to cook in the food truck, Chris had to leave the family business and get another job. Chris—along with Lisa, Kevin and Jessica—would love to open the food truck again, but doing so could expose them to fines of $500 per day. 2 Meanwhile, customers lose out. White Cottage Red Door’s food truck offered new options to families tired of the same old choices. But thanks to Gibraltar’s town board, they can no longer choose where to get their lunch.

Gibraltar’s food truck ban does not promote health or safety, or any other legitimate government rationale. After all, White Cottage Red Door’s cherry pie is just as safe indoors at its brick-and-mortar store as it is a few feet away at a state-licensed truck. Given that irrationality, many residents have panned the town’s ban. For instance, a Door County news publication—the Peninsula Pulse—mocked Gibraltar’s town board by depicting a “Fish Creek Food Truck Festival” in its 2018 April Fools’ edition.

But the town’s ban has one purpose, albeit an illegitimate one—to protect established restaurants from competition. Indeed, the town board’s ties to the restaurant industry seem to have motivated the ban. Gibraltar’s chairman—who voted for the ban—owns a brick-and-mortar restaurant in Fish Creek. Also, a former board member who moved the town board to revoke White Cottage Red Door’s zoning permit during his tenure is an accountant at a pizzeria in Fish Creek. And a third board member has publicly sympathized with restaurateurs’ protectionist impulses. After eating an Italian beef sandwich at a food truck in a neighboring town, he exclaimed that “it was out of this world” and that he understood how a “restaurant should be up in arms over” food trucks.

Sadly, Gibraltar is far from the only municipality that has passed laws to protect some restaurants from competition. The Institute for Justice has struck down protectionist vending restrictions in larger cities such as El Paso, Louisville, and San Antonio. Gibraltar’s vending law is, like the restrictions in those other cities, unconstitutional and illegal, as set forth below.

To vindicate Cheeseheads’ rights throughout Wisconsin, Lisa, Kevin, Jessica and Chris are standing up to Gibraltar’s board. In May 2018, they commenced a civil rights challenge against the town by filing a formal written notice demanding that the town board repeal its vending ban. The town refused to do so and continues to stop them from operating a food truck on their own property. As a result, they are now asking Wisconsin state courts to strike down Gibraltar’s vending ban for two reasons.

First, Gibraltar’s vending ban is unconstitutional. The Wisconsin Constitution protects the rights of entrepreneurs like Lisa, Kevin, Jessica and Chris to earn an honest living free from arbitrary restrictions, especially on their own property. 3 There is no legitimate justification for banning stores, including restaurants, simply because they have wheels. Gibraltar’s vending ban has only one purpose: to protect brick-and-mortar businesses from competition. Economic protectionism is simply unconstitutional.

Second, Gibraltar’s food truck ban violates state law. Wisconsin’s courts have held that municipalities cannot drown businesses in red tape after they have been state approved. Under this standard, no town can ban what Wisconsin has expressly licensed. But that is exactly what Gibraltar has done by banning food trucks like White Cottage Red Door’s, which earned state licenses after satisfying Wisconsin’s food-safety requirements for mobile restaurants.

The Institute for Justice is a public interest law firm that brings challenges nationwide in support of fundamental individual liberties. IJ has successfully challenged restrictions on economic liberty across the nation, including through its National Street Vending Initiative.

IJ’s National Street Vending Initiative is a nationwide effort to vindicate the right of street vendors to earn an honest living by fighting unconstitutional vending restrictions in courts of law and the court of public opinion. As it has done across the country, IJ stands ready to challenge such restrictions, and it will help vendors oppose attempts to shut them down through the use of unconstitutional protectionist laws.