In 2018, Mario Rosales became the victim of a deputy’s road rage. He was driving his yellow Mustang home when he passed Chaves County Sheriff’s Deputy David Bradshaw, who was off-duty and in his personal pickup truck. Bradshaw’s ego did not take kindly to a Mustang passing him, and his notorious temper took off. He followed Mario home, blocked him in the driveway, yelled and cursed at him, and ultimately pointed a gun at him. Bradshaw did all this in shorts and flip-flops, with his small child right next to the pointed gun. Mario was afraid but kept his cool and tried to calm Bradshaw down.

Another deputy who arrived on the scene defused the situation. As a result of the incident, Bradshaw lost his job and was convicted of aggravated assault and child abuse.

To vindicate his constitutional rights, Mario sued Bradshaw and the county sheriff who hired him. Predictably, Bradshaw invoked qualified immunity—a doctrine that the Supreme Court invented in 1982 to protect most government workers from being sued for unconstitutional conduct. Based in part on that doctrine and in part on a supposed technical error in his claims against the government employer, Mario’s case was dismissed from federal court. This, even though the court recognized that Mario’s rights were indeed violated. Mario still could not sue the deputy. Nor could he sue the county sheriff, even though Bradshaw lost a prior law-enforcement job because of similar violent conduct.

Kicking Mario’s case out of court is wrong. Qualified immunity has limits and doesn’t cover what Bradshaw did to Mario. And, independent of that, governments must be held responsible for rights violations they cause—for example, by hiring or failing to train or fire an officer who is likely to violate people’s rights. 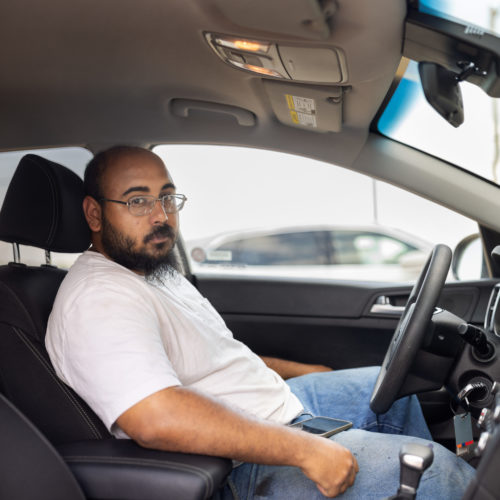 Mario is Held at Gunpoint in His Own Driveway

On March 18, 2018, Mario Rosales was driving home in his yellow Mustang in Roswell, New Mexico. He passed a black Ford pickup truck, driven by off-duty Chaves County Sheriff’s Deputy David Bradshaw. Bradshaw apparently didn’t like being passed by the Mustang, which set off his explosive temper. He started following Mario and called another deputy to look up information about him and his car. Though he told that deputy not to come to his location, she ignored him and headed toward Mario’s house, knowing Bradshaw’s volatile temper.

Meanwhile, worried that a hostile stranger was following him, Mario started taking a less-direct route home, making turns without signaling to see if he was indeed being followed. Sure enough, the black truck tracked every turn.

Seconds after Mario pulled into his driveway, Bradshaw blocked Mario in with his truck. Scared that a road-raging stranger had now trapped him, Mario put his lawfully owned handgun in his pocket, displaying it openly according to New Mexico law.

Bradshaw immediately began yelling and cursing at Mario, who had no idea the man was an off-duty officer or why Bradshaw had tailed him home. Mario tried to calm him down. But Bradshaw only continued to yell. At one point, Bradshaw made a comment about Mario’s handgun. Mario explained that he was simply exercising his rights.

Eventually, Bradshaw identified himself as a law-enforcement officer, threatened that he could write Mario a ticket, and told Mario that he had contacted another officer. During this exchange, Bradshaw pulled out a revolver and pointed it at Mario, who kept his hands away from his gun and tried to reason with Bradshaw.

A gust of wind then blew Mario’s shirt over his handgun, and Bradshaw remarked, “now that’s concealed carry,” raising his revolver like he was going to shoot Mario. Mario put his hands in the air and backed away. At that time, Mario saw a child’s head (Bradshaw’s toddler) in the front passenger seat of the Bradshaw’s truck. The child was between the men and just inches from Bradshaw’s gun. Bradshaw offered to talk with Mario if he would put his gun back in his car, so Mario did.

Bradshaw then got out of the truck, wearing a long-sleeve t-shirt, shorts, and flip-flops. Instead of talking as promised, he asked Mario for his license and if he had been drinking. Mario gave him his license and said that he does not drink. Bradshaw continued to berate Mario in the driveway, but fortunately the other deputy arrived. She encouraged Bradshaw to leave. He did, but not before telling Mario, “I’ll talk to you in court when you get your citation in the mail.”

The other deputy returned Mario’s license and told him he would not be getting a citation from her. He did not receive one.

Bradshaw is Convicted of Crimes

After the incident, a state prosecutor charged Bradshaw with aggravated assault with a deadly weapon and child abuse. A jury found Bradshaw guilty, and a judge imposed a two-year sentence. Bradshaw’s employer, Chaves County, dismissed him from his job and has argued that what Bradshaw did was outside the bounds of his employment. Only Bradshaw refused to admit what he did was wrong, but Chaves County has refused to take responsibility for hiring, failing to train, and failing to fire an officer with a volatile temper who was forced out of law enforcement jobs for similar reasons in the past.

While he was with the Los Alamos Police Department, Bradshaw was sued for his violent treatment of a detainee. Chaves County hired Bradshaw even though he had been released from his job with Los Alamos.

It is one thing for the state government to enforce the state’s criminal laws. But it is quite another for the American people to hold the government and its officials accountable for violating their constitutional rights. Without that accountability, the Bill of Rights is nothing but an empty promise that cannot be enforced. So, Mario sued. In federal court, the judge decided that Bradshaw did violate Mario’s constitutional rights: it was unreasonable to hold Mario at gunpoint when he posed no threat.

But the court dismissed Mario’s case by deciding that his claim against the county was flawed and Bradshaw had “qualified immunity.”

The qualified-immunity doctrine is found nowhere in the Constitution or the federal civil-rights statute; its current iteration was made up by the U.S. Supreme Court in 1982. Qualified immunity shields government officials from constitutional lawsuits, even if they act in bad faith, unless an earlier case ruled that the same sort of conduct was unconstitutional.

While qualified immunity is difficult to overcome, it does have limits. And Bradshaw’s conduct went beyond them. The court’s contrary decision was wrong. To right that wrong, Mario, represented by the Institute for Justice, is appealing his case to the Tenth Circuit.

In Mario’s appeal, the Institute for Justice argues that qualified immunity does not apply to Bradshaw for three reasons. First, qualified immunity applies only to officers who were acting within the authority given to them by law, and Bradshaw was acting outside the authority he had as a sheriff’s deputy. So he was not eligible for qualified immunity in the first place. Second, earlier cases made clear that pointing a gun at a nonthreatening person, especially someone who had not committed a violent crime, is unconstitutional. Finally, it would have been obvious to any reasonable officer that what Bradshaw did violated the Constitution. Mario and IJ further argue that the county also violated Mario’s rights by repeatedly failing to eliminate or reduce the known risk that Bradshaw would use excessive force.

Mario’s goal in this lawsuit is to stand up for his and other Americans’ rights, to hold the government and Bradshaw accountable for violating his rights, and to encourage law enforcement officers to follow the Constitution. If someone who is not a police officer did what Bradshaw did—following someone home, blocking them in the driveway, and pointing a gun at them—that person could be liable. Police officers should not get a free pass simply because they hold a badge.

Founded in 1991, the Institute for Justice is a national, non-profit law firm dedicated to fighting judge-made rules that make it difficult to hold government officials accountable for violating the Constitution. IJ’s efforts include direct lawsuits against government officials, friend-of-the-court briefs in support of individuals who have suffered at the hands of government officials, and outreach to members of the public who want to know more about the difficulties of suing governments and their employees for violations of individual rights. IJ does all this based on a fundamental belief that following the Constitution means being held accountable for violating it.