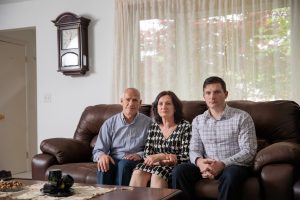 The Kazazi family epitomizes the American Dream. Rustem was born and raised in Albania and served for 30 years in the Albanian national police force, ending his career as an instructor at the country’s police academy. Lejla worked as a high school science teacher, and the couple raised two children together.

Even with the fall of communism, corruption and economic upheaval continued to grip Albania. Rustem and Lejla wanted a better life for their children, so they applied for and received visas through the U.S. Department of State’s lottery program. In 2005, the family left Albania and settled in Cleveland, Ohio. They became American citizens in 2010.

Ever since their arrival in the U.S., the Kazazis have worked hard and saved their money. Rustem took jobs doing demolition and other manual labor, working as a custodian, and often working two or three jobs at a time. Lejla started out as a custodian working nights, but over time, her English improved to where she now teaches English as a second language. After living in a small apartment for a few years, the Kazazis bought a modest home in a quiet Cleveland suburb.

Rustem and Lejla instilled the same work ethic in their children. Erald, now 23, will soon earn his bachelor’s degree in chemical engineering. Like many young Albanian men, Erald lives at home with his parents and contributes to family expenses.  In fact, $24,000 of the cash seized from Rustem was money that Erald had given to him from jobs he worked throughout high school and college.