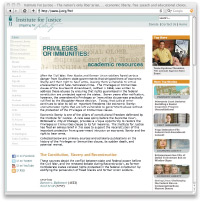 On March 2, 2010, the U.S. Supreme Court will hear oral argument in a case that presents the single best opportunity the Court has ever had to repudiate the woefully misguided Slaughter-House Cases and begin enforcing the 14th Amendment as it was understood and intended by those who ratified it. That case, McDonald v. City of Chicago (in which IJ filed an amicus brief), presents a challenge to Chicago’s handgun ban following the 2008 path-breaking Second Amendment decision District of Columbia v. Heller, which was litigated by IJ Senior Attorney Clark Neily, IJ Board member Bob Levy and former IJ law clerk Alan Gura. Here is how we came to this historic moment.

Following the Civil War, the former states of the Confederacy made clear their intent to keep newly free blacks—called freedmen—in a state of constructive servitude. They did this by stripping freedmen of their basic civil rights, particularly the rights to freedom of speech, armed self-defense and economic opportunity. This was accompanied by a campaign of terror in which anyone—white or black—who presumed to resist was persecuted, intimidated and, in many cases, lynched.

Reconstruction Republicans were outraged by this conduct, and they determined to put an end to it with the 14th Amendment, which was ratified in 1868. At the heart of the Amendment lay its command that “[n]o state shall make or enforce any law which shall abridge the privileges or immunities of citizens of the United States.” Just five years later, five Justices of the U.S. Supreme Court essentially stripped that provision out of the 14th Amendment in the Slaughter-House Cases because they considered it unwise to give federal courts the power to protect people’s rights against state and local officials.

Despite near-universal consensus that Slaughter-House was wrongly decided, the Supreme Court has never revisited the decision. Until now—maybe.

The constitutionality of Chicago’s handgun ban remains an open question after Heller because state and local governments are not bound by the Bill of Rights, but by the 14th Amendment, which has been interpreted to “incorporate” most of the provisions in the Bill of Rights with one particularly notable exception: the right to keep and bear arms. Incredibly, the U.S. Supreme Court has never decided whether Americans have a constitutional right not to be disarmed at the whim of local government officials, even though the right to keep and bear arms was mentioned repeatedly during the drafting and ratification of the 14th Amendment—by proponents and opponents alike.

What makes McDonald such an exciting opportunity is that the U.S. Supreme Court passed over several other post-Heller gun rights cases and granted certiorari in the one where the Privileges or Immunities Clause stands front and center. And that is because McDonald attorney Alan Gura, who was also lead counsel in Heller, made a bold decision to reject the conventional wisdom of arguing for incorporation under the Due Process Clause and litigate McDonald as a Privileges or Immunities case all the way. It is indisputable that the people who wrote and ratified the 14th Amendment intended the Privileges or Immunities Clause to protect the right to keep and bear arms. The time has come for the Supreme Court to finally honor that purpose. In so doing, it will go a long way toward reversing Slaughter-House and breathe life into the 14th Amendment—including the right to economic liberty­­—the way it was understood and intended by those who ratified it.