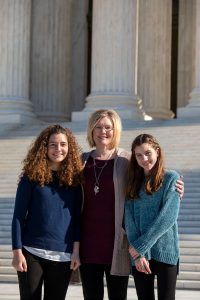 “The Supreme Court delivered a major victory to parents who want to choose the best school for their children, including religious schools,” said Institute for Justice Senior Attorney Erica Smith, who was co-counsel on the case. “This is a landmark case in education that will allow states across the country to enact educational choice programs that give parents maximum educational options.”

The case began in 2015 when the Montana Legislature passed a tax-credit scholarship program that enabled taxpayers to receive a $150 tax credit in exchange for donating to nonprofit scholarship organizations. These scholarship organizations provide scholarships to low-income students and students with disabilities whose parents believe that an alternative to their public school will best serve their children’s interests. The Montana Supreme Court struck down the program in its entirety because it permitted families to choose religious options in violation of the state’s Blaine Amendment—a provision initially enacted in the late 1800s to discriminate against Catholic schooling. IJ appealed the case to the Supreme Court on behalf of its three clients, including lead plaintiff Kendra Espinoza, a single mother and one of the beneficiaries of the tax-credit program.

“I am thrilled that the courts ruled in favor of the Constitution and maintained a parent’s right to choose where their children go to school,” said Espinoza. “For our family, this means we can continue to receive assistance that is a lifeline to our ability to stay at Stillwater. For so many other families across America, this will potentially mean changing lives and positively altering the future of thousands of children nationwide. What a wonderful victory.”

The win and the promise of continued scholarships is a significant boost to Kendra, who has had to work multiple jobs, including cleaning houses and doing janitorial work, to afford her daughters’ tuition payments at a private Christian school in Kalispell. Kendra transferred her two daughters to Stillwater Christian School after they struggled in their public school. Montana’s scholarship program has helped Kendra and families across the state keep their children in the school that works best for them.

In a decision written by Chief Justice John Roberts, the Court held that Montana engaged in religious discrimination when it applied the state’s Blaine Amendment to bar religious options in educational choice programs. It also held that Montana did not cure this discrimination when it struck down the entire scholarship program, including for children attending nonreligious schools, to prevent children attending religious schools from receiving scholarships.

As the Court said, “A State need not subsidize private education. But once a State decides to do so, it cannot disqualify some private schools solely because they are religious.”

The ruling also stated: “Drawing on ‘enduring American tradition,’ we have long recognized the rights of parents to direct ‘the religious upbringing’ of their children. . . . Many parents exercise that right by sending their children to religious schools, a choice protected by the Constitution.”

“It’s been a century-and-a-half since the bigoted Blaine movement took root in state constitutions throughout the country,” said IJ Senior Attorney Richard Komer, who argued the case before the Court. “Today’s decision shows that it is never too late to correct an injustice, even one with as long and ignoble a pedigree as this one.”

Today’s decision will affect most of the 14 states that have strictly interpreted their state constitution Blaine Amendments to bar scholarships to children at religious schools. For decades, the creation and expansion of school choice programs have been inhibited by legislative concerns that they might conflict with state constitutions. Those concerns are now removed with today’s decision in Espinoza.

“We are so proud of what the Institute for Justice and our clients have accomplished in Espinoza,” said IJ President and General Counsel Scott Bullock. “Today’s decision is a great win for IJ, and an even greater win for the millions of families who may now be able get the education that works best for them.”