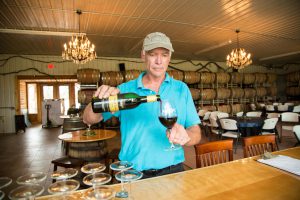 If you want to buy your favorite wine at a farm winery in Minnesota, chances are you’ll be out of luck. A little-known but onerous state law bans farm wineries from legally making wine unless a majority of the winery’s grapes are grown in Minnesota—a restriction that protects the state’s grape industry from economic competition. This unusual and severe restriction effectively ruins Minnesota farm wineries’ potential to grow economically and provide tasteful, affordable wine to consumers.

For comparison, Minnesota’s biggest craft breweries, like Summit and Surly Brewing, are among the most successful in the country, thanks in part to a variety of hops grown in the Pacific Northwest that flavor their signature beers. If Minnesota breweries were instead forced to mostly use hops grown in Minnesota, many of their popular products would become difficult, if not impossible, for them to offer. This is the separate and unequal problem facing Minnesota’s farm wineries. But now, two farm wineries, Alexis Bailly Vineyard and Next Chapter Winery, have partnered with the Institute for Justice (IJ) on a new lawsuit that aims to show Minnesota’s out-of-state grapes restriction violates the U.S. Constitution.

“Minnesota is hurting farm wineries and wine drinkers to illegally prop up the grape industry,” said Meagan Forbes, an attorney in the Minnesota office of the Institute for Justice. “Imagine if other states retaliated against Minnesota’s protectionism and banned Minnesota products. Minnesota is the leading national producer of sugar beets, oats, and sweet corn. Most American sugar comes from sugar beets, which generate nearly $5 billion for the regional economy, and nearly half of Minnesota crop production is corn. If other states passed laws against Minnesota sugar, oats or corn in goods like cereal, oatmeal, candy bars or wine, Minnesota’s farm economy would collapse. Fortunately, the U.S. Supreme Court has ruled that the Constitution protects hardworking Americans from exactly this kind of interstate trade war.”

Most wines Americans are accustomed to drinking are made with grapes that struggle in Minnesota’s cold climate. Northern grape varieties, which can grow with some difficulty in Minnesota, often produce wine too acidic for most consumers. To make a Minnesota wine palatable, most wineries blend Minnesota grapes with grapes grown elsewhere to create a wine that is essentially Minnesota, but more flavorful. The trouble is that state law mandating Minnesota grapes comprise the majority of a farm winery’s wine handicaps vintners hands. As a result, the government’s in-state grape requirement restricts farm wineries from producing the broad variety of wines that consumers want—even though these wines would be legal to sell at a wine or liquor store.

“We’re fighting for our right to run a successful business,” said Nan Bailly, owner of Alexis Bailly Vineyard, which was started by her father. “We have always carried the flag for Minnesota-grown and Minnesota-made wines, and always will. We have the oldest winery in Minnesota, and our estate-produced wines are the hallmark of our winery.  But as our business has grown, we cannot produce enough from our vineyard to meet demand. The government is keeping us from making the wines that people are asking for.”

“Minnesota’s unconstitutional protectionism is a needless attack on the wallets and economic opportunity of its own residents,” added IJ senior attorney Anthony Sanders. “We’re confident the court will protect the ability of farm wineries to make whatever wine Minnesotans want to have.”

This is not the first time IJ has fought illegal wine regulations in court. In 2005, IJ litigated Granholm v. Heald before the U.S. Supreme Court, winning decisively. After hearing IJ’s arguments, the High Court found it unconstitutional for states to discriminate against out-of-state wineries in the business of selling wine directly by mail to consumers.