Judge Strikes Down Ban on Selling Home-Baked Goods as Unconstitutional 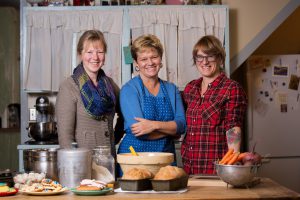 Madison—Wisconsin became a little freer, and a lot more delicious, after a Lafayette Circuit Court judge struck down the state’s ban on selling home-baked goods as unconstitutional. Wisconsin was one of only two states to ban entrepreneurs like Lisa Kivirist, Kriss Marion and Dela Ends from selling cookies, cakes, muffins and breads simply because they are made in a home kitchen. The three bakers teamed up with the Institute for Justice in January 2016 to challenge the ban in state court.

In his ruling issued late yesterday, Judge Duane Jorgenson found that the ban had “no real or substantial connection” to protecting the public because there was no instance of anyone ever becoming sick from an improperly baked good, despite home baked goods being legally sold in 48 states. In addition, Judge Jorgenson found that the ban continued to exist because of the lobbying efforts of special interest groups, like the Wisconsin Bakers Association, who did not want to have to compete with home bakers.

“Yesterday’s decision has been years in the making. Wisconsin’s home bakers have been fighting for their right to bake and that right has finally been vindicated by the courts,” said Erica Smith, an attorney with the Institute for Justice. “Judge Duane Jorgenson rightfully stated that the primary effect of this ban is to protect established businesses from competition. Not only is protecting other businesses from competition un-American, but it is also unconstitutional. The Wisconsin Constitution protects the right to earn an honest living, and we are pleased the court agrees.”

Under the ban, if a Wisconsinite wanted to sell even one cookie, they had to acquire a burdensome commercial license, which required spending tens of thousands of dollars to rent or build a commercial kitchen, numerous inspections and multiple fees. New Jersey is now the only state to have a similar ban.

“This is more than a win for us home-based bakers, it’s recognition for all small businesses that we have the right to earn an honest living and will not be stymied because of industry influence,” explained Lisa Kivirist, a Wisconsin baker who challenged the law. “I’m excited to get in my kitchen and start baking as finally Wisconsin is truly open for business.”

“I’m so happy and excited to share this victory with every home-baking entrepreneur in Wisconsin,” stated Dela Ends, another baker who challenged the law. “This is truly a win for entrepreneurs everywhere— now let’s bake!

“This decision is especially important for Wisconsin’s struggling farm families and tiny rural towns,” said Kriss Marion, the third baker who challenged the law in court. “With abundant natural resources and such a strong agricultural history, we should be leading, not lagging behind, in the growing farm-to-foodie movement. I know many home bakers who cannot wait until they are officially allowed to sell their baked goods at farmer’s markets across the Badger State.”

“Across the United States, governments at every level are chipping away the rights of food entrepreneurs through irrational and overly burdensome regulations,” continued Smith. “Since 2013, the Institute for Justice’s Food Freedom Initiative has been challenging laws that dictate what foods people can make, buy, sell and even advertise. This is not just a victory for Wisconsin home bakers but a win for all food entrepreneurs and food lovers who want the government out of their kitchens.”