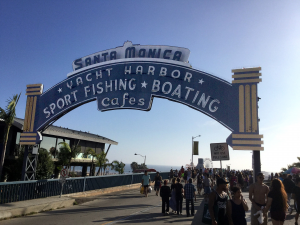 Scott Shatford has earned the dubious distinction of being the first person convicted under Santa Monica, California’s strict laws on short-term rentals. For listing rental properties on Airbnb, Shatford was “charged with eight misdemeanor counts of operating a business without a license and failing to comply with citations after he refused to stop renting out his properties,” the Los Angeles Times reported. In a plea deal, Shatford agreed to stop renting out properties in Santa Monica, pay $3,500 in fines and has been placed on probation for two years. To investigate Shatford, officials booked one of his properties for $1,200 for four nights.

Last year, the Santa Monica City Council unanimously voted to ban renting out an entire residence for less than 30 days. A city report estimated the ban would outlaw 1,400 rental units, or about 80 percent of the city’s short-term rentals. Today, Santa Monica even has two code enforcement officers and a “Vacation Rental Enforcement Task Force” dedicated to enforcing its ban.

Shatford has rented out properties for four years and runs a website to help hosts “Airbnb like a pro.” “I was probably targeted by Santa Monica because I was out there, talking about my rentals,” he said in an interview with the Times. “The city came after me, to make me their little poster child and be able to promote me as their first victory. … It’s pretty silly.”

He now plans to move to Denver, which recently began a license program for short-term rentals. Across the country, Airbnb has been in the crosshairs of bureaucratic busybodies. In New York City, Nigel Warren was once fined $30,000 for “operating an illegal hotel.” Fortunately for him, those fines were later reduced and ultimately reversed. Earlier this year, Virginia attempted to liberalize short-term rentals, but faced lobbying by the Virginia Restaurant, Lodging & Travel Association. And in May, Arizona Gov. Doug Ducey signed a bill that bans local governments from banning short-rental rentals.