Eyebrow threading is an ancient grooming technique that dates back thousands of years to parts of South Asia and the Middle East. Using only a simple cotton thread to form loops as they work, threaders quickly and precisely remove unwanted facial hair. Since its arrival in the United States, threading has become increasingly popular, offering threaders countless opportunities for employment, entrepreneurship, and their own chance at the American dream.

Unlike Western hair-removal techniques, threading does not involve skin-to-skin contact or the use of chemicals, heat or sharp objects. And unlike waxing, threading carries no risk of skin removal or burns. It is also quicker and less expensive than other forms of hair removal. The entire process generally takes less than 10 minutes and costs between $10 and $20.

But many state governments have created burdensome barriers that make it virtually impossible for threaders to earn a living. Several states require threaders to become licensed estheticians, which forces threaders to waste hundreds of hours and thousands of dollars learning cosmetology techniques they do not use.

IJ’s model threading act is based on the day-to-day practices of threaders and presents the best language for states to exempt threaders from licensing laws. 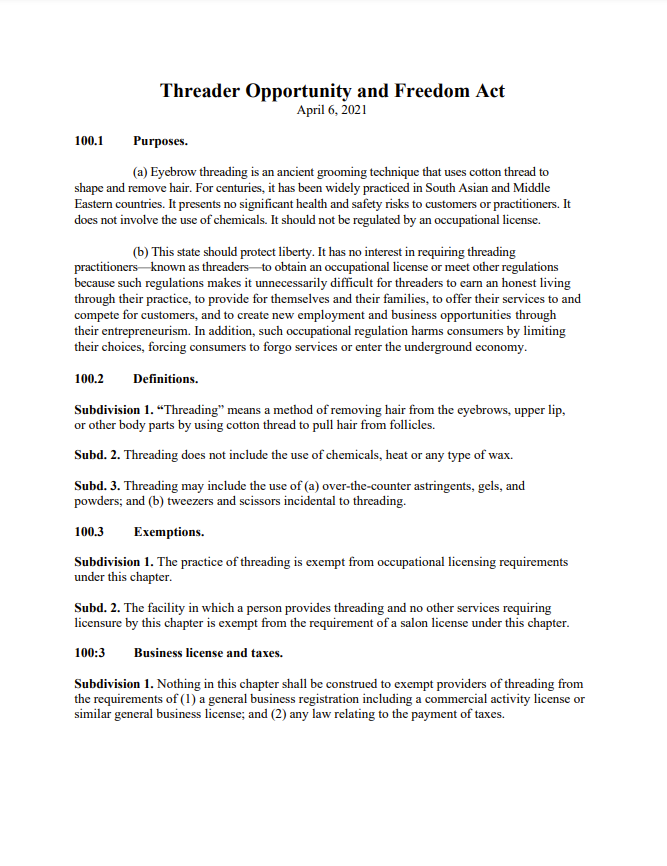