Breaking Down Barriers to Interstate Mobility

Occupational licenses often are barriers to worker mobility. One state will not recognize another state’s license because personal qualifications differ. And even when some recognition is included in statutes, state laws often impose significant costs—in time and money—for a worker to have the second state recognize his license.

Of course, a worker does not lose his skills just by moving across state lines, yet licensing laws often treat him as if he does.

To better promote labor mobility, the Institute for Justice has written the Universal Recognition of Occupational Licenses Act. Inspired by Arizona’s landmark 2019 reform, the model causes a state to recognize an out-of-state license if the worker (1) is currently licensed by another state and (2) has been licensed for at least one year.

IJ’s model is better than reciprocity agreements and interstate compacts. Legislators can enact it unilaterally and the model applies to all states. Moreover, it avoids the flaw of freezing in place personal qualifications, which make it harder for legislators to subsequently reform their states’ own laws.

Although important, this model does not address the substance of a state’s licensing laws. To that end, IJ offers its Occupational Licensing Review Act Model Legislation to reduce or repeal licensing laws. Still, IJ’s Universal Recognition of Occupational Licenses Act is good place for legislators to embark on reforms to this large, costly and unnecessary labor-market institution.

Today, 18 states have enacted some form of universal license recognition. 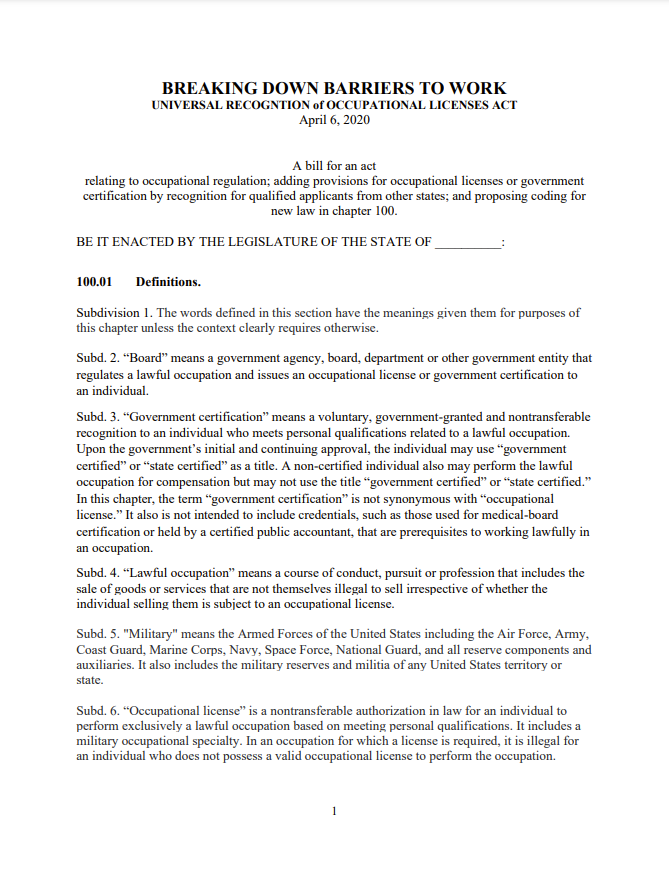