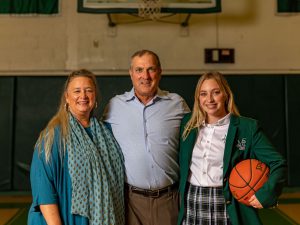 Rutland, VT—Michael and Nancy Valente live in the small town of Mount Holly, Vermont where they are raising their son, Dominic, who is entering the tenth grade. Since Mount Holly is too rural to operate a high school, it instead participates in a state program that gives parents tuition to send students to the school of their choice, public or private. But there is a hitch. The state will not provide the tuition benefit to families who enroll their students in religious schools.

The Valentes are not eligible for the state stipend because Dominic attends Mount St. Joseph Academy, a Catholic school 17 miles from their home. Now, the Valentes and two other Vermont families are teaming up with the Institute for Justice (IJ) to file a lawsuit in federal court arguing that the state’s refusal to provide tuition to families choosing religious schools violates the U.S. Supreme Court’s recent decision holding that excluding religious educational options from educational choice programs violates the Free Exercise Clause of the U.S. Constitution.

“In June, the U.S. Supreme Court made it clear that states cannot exclude religious schools from educational choice programs—that includes Vermont’s town tuitioning program,” said IJ Senior Attorney Tim Keller. “The school the Valentes chose for their son meets every qualification except one—it is religious. According to the U.S. Supreme Court, that’s unconstitutional.”

This summer the U.S. Supreme Court handed down a decision in Espinoza v. Montana Department of Revenue, a case which IJ litigated on behalf of Montana parents. In the Court’s opinion, Chief Justice John Roberts wrote that, “[a] State need not subsidize private education. But once a State decides to do so, it cannot disqualify some private schools solely because they are religious.”

“Vermont has some great public schools, but the ones available to us weren’t a great fit for our son,” said Michael Valente. “And I know we are not alone. Families across the state send their kids to private religious schools for a variety of reasons. The state should not discriminate against those families for doing what’s best for their kids.”

In Vermont, the state allows rural school districts that lack public schools for any grade level to pay students’ tuition at public or private schools of the parents’ choice. Over 80 Vermont towns participate in the program for at least some grade levels. But the state policy prohibits those school districts from paying tuition on behalf of families who choose otherwise qualified religious schools. Despite the recent Supreme Court decision, the Valentes’ school district has told them that the state continues to discriminate against private religious schools.

“States have to follow the U.S. Supreme Court’s lead and strike down the restrictions on the tuitioning program,” said IJ Attorney David Hodges. “Vermont is not the only state to exclude religious schools and the Institute for Justice will ensure that state educational choice programs abide by the Constitution.”

“The U.S. Supreme Court has made clear that states may not exclude religious options from educational choice programs just because of their religious character,” Keller added. “The guarantees of the U.S. Constitution apply to citizens in every state, and that includes Vermont.”