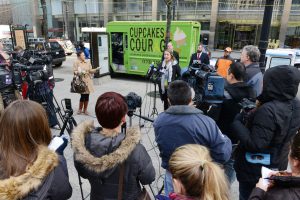 Chicago—Can the government throttle competition just to line the pockets of established, well-connected businesses? That is the subject of an Illinois Supreme Court petition filed late Friday by the Institute for Justice (IJ) on behalf of Laura Pekarik, owner of the Chicago-based Cupcakes for Courage food truck. Laura and IJ first teamed up in 2012 to challenge two controversial aspects of Chicago’s food truck laws: its ban on operating a food truck within 200 feet of a restaurant and its requirement that food trucks install GPS tracking devices that broadcast their every move.

“For almost six years, the Institute for Justice has been fighting to bring food truck freedom to the Windy City,” said Robert Frommer, IJ senior attorney and director of its National Street Vending Initiative. “We have been fighting that long because Chicago’s laws are some of the worst in the country.”

Chicago—unlike the rest of America’s ten largest cities— prohibits food trucks from operating within 200 feet of a restaurant.  An IJ analysis of Chicago’s 200-foot rule shows that the rule makes it nearly impossible for food trucks to operate in the North Loop, the prime location for food trucks serving lunch. That same analysis revealed that food trucks can legally park and operate at just 3 percent of the district’s curbs.  Food trucks that park too close to a restaurant can be fined up to $2,000—ten times greater than the fine for parking in front of a fire hydrant.

Worse yet, to enforce the 200-foot rule, Chicago is one of only a handful of cities nationwide to force food trucks to install GPS tracking devices that transmit a truck’s location every five minutes. The law’s plain language lets anyone ask for and receive access to this sensitive data.

Chicago officials have admitted they enacted these harsh rules to protect established brick-and-mortar restaurants. And the effects have been widespread: The number of food trucks operating in Chicago has plummeted from 127 in 2012 to less than 80 today.

But in December 2017, the Illinois Appellate Court, First District held that the 200-foot rule and GPS requirement were constitutional.  In so holding, the First District said that Chicago could legitimately discriminate against food trucks in order to enrich brick-and-mortar restaurants that city officials think may pay more in taxes.  And it held that Chicago’s GPS requirement is exempt from constitutional scrutiny both because the city doesn’t install the device itself and because food truckers must “agree” to the requirement as a condition of licensure.

IJ is now asking the Illinois Supreme Court to take up the case. “The appellate ruling is a profound threat to the constitutional rights of all individuals, entrepreneurs and business owners in Illinois,” said Robert Frommer, senior attorney and lead counsel on the case. “If left standing, the ruling would let Chicago run all sorts of legal businesses out of town in order to financially benefit their would-be competitors.  And it would mean that the government could force anyone who needs a government license to work to submit to invasive GPS tracking.  The Illinois Supreme Court should take up Laura’s case to correct the appellate court’s dangerous decision.”