Americans have a long tradition of running for office with the goal of improving their local communities. After a fulfilling career in communications, Sylvia Gonzalez did just that. She knocked on the doors of 500 residents in Castle Hills, Texas, and squeezed out a win, beating a well-connected and powerful incumbent. In the process, Sylvia became the first Hispanic woman to become a council member in her hometown.

After her election, Sylvia got right to work. Acting on her campaign promise, she helped spearhead a citizens’ petition advocating for the removal of Castle Hills’ city manager Ryan Rapelye. The petition was a non-binding vote of no confidence in Rapelye, who had come under criticism for mistreating his employees and failing to address citizens’ concerns, such as fixing their streets.

The petition did not sit well with Castle Hills’ incumbents, whose interests were well-represented by the city manager. Within weeks of winning her election, the harassment began. First, the city attorney, who was aligned with the mayor and the city manager, claimed Sylvia wasn’t properly sworn in and replaced her on the city council with the woman she’d just beaten. When a judge reinstated Sylvia, the city officials didn’t give up.

In fact, that was only the beginning. In the midst of their attempt to unseat her, the mayor and police chief used bogus charges and a rarely-used law to have Sylvia arrested, booked, and thrown in jail—but she had done nothing wrong. Once the county prosecutor got involved, he dropped the case against her.

Finally, after beating back the city twice, a group of citizens aligned with the mayor filed a lawsuit claiming Sylvia was incompetent. Sylvia stood her ground and won—but by then the damage had been done. Sylvia’s mugshot had been splashed across the news and her reputation dragged through the mud. Exhausted—with tens of thousands of dollars in legal bills—she stopped the fight to reclaim her seat.

The city’s retaliation clearly violates Sylvia’s First Amendment rights. If America’s democracy means anything at all, it means that a city can’t arrest its residents for speaking out against a city manager. The fundamental right of political speech is high in the hierarchy of First Amendment values and the courts exist to ensure that it is protected.

On September 29, 2020, Sylvia partnered with the Institute for Justice to file a federal lawsuit against Castle Hills to vindicate her First Amendment rights and hold the city officials accountable. The lawsuit is part of IJ’s Project on Immunity and Accountability, which is devoted to the simple idea that government officials are not above the law; if citizens must follow the law, then government must follow the Constitution. 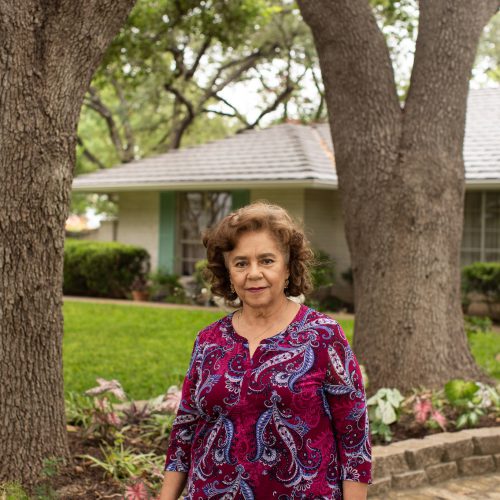 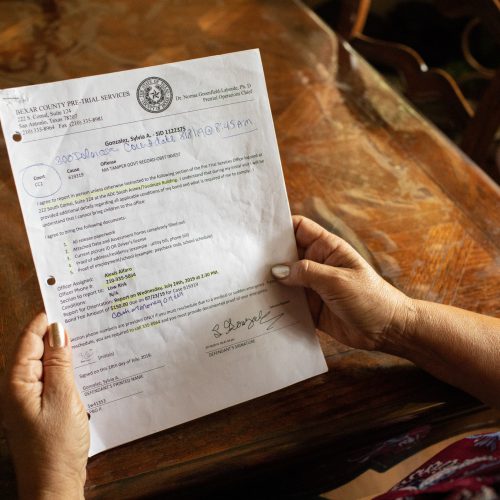 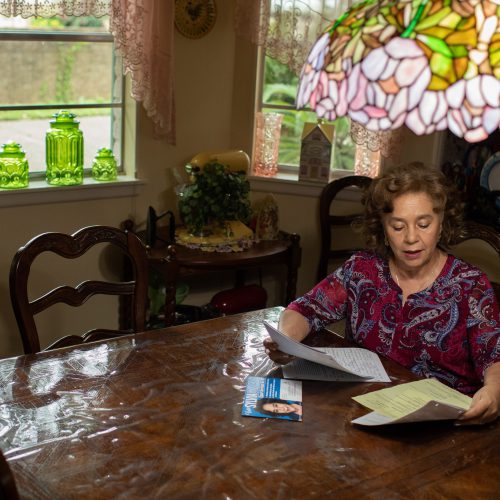 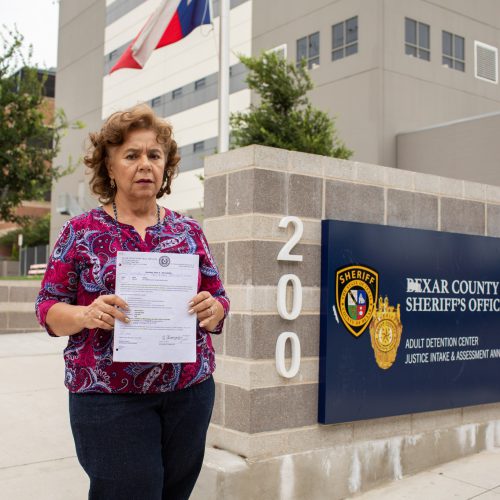 After Being Arrested for Speaking Out, a Texas Woman Sues to Hold Gov. Officials Accountable

Sylvia Gonzalez unseats an incumbent and champions a petition after hearing serious concerns from local residents about city management.

After retiring from a career in communications, Sylvia Gonzalez decided to run for a seat on the city council in her hometown of Castle Hills, Texas—a 4,000-person San Antonio suburb. Sylvia ran against a well-connected incumbent, but she worked hard to earn the confidence of her neighbors, knocking on countless doors and meeting with more than 500 Castle Hills families.

Sylvia was surprised by the level of dissatisfaction from her community. Many residents complained of the lack of services—like fixing the streets—and the lack of response from the city government—like the city manager’s failure to return the residents’ calls.

One resident suggested that Sylvia organize a petition to express the residents’ concerns to the city and ask for change. Sylvia resolved she would.

On May 4, 2019, Sylvia was elected as the first Hispanic councilwoman in Castle Hills history. As her first act in office, Sylvia championed a nonbinding, citizen-signed petition calling for the city manager’s removal. The petition was a pure expression of political speech and had no legal force. It was designed simply to express the discontent of Sylvia’s constituents at city management.

The city and its officials punish Sylvia for speaking out, having her arrested on trumped up charges.

At Sylvia’s first council meeting, a resident submitted the petition to the city council, which was then provided to the mayor.

The meeting was very contentious and ultimately bled into a second meeting the following night. When the meeting finally ended, Sylvia—who sat next to the mayor—gathered up her papers from the table and placed them in a binder. Sylvia was called away from the table, leaving her binder on the table. Minutes later, a Castle Hills police officer tapped her on the shoulder and told her that the mayor wanted to speak with her. Sylvia returned to the table, where the mayor told her to look for the petition in her binder. Unexpectedly, she found it there. Importantly, when Sylvia handed the petition to the mayor, he mentioned in passing that she “probably picked it up by accident.”

Two days after the meeting, the police chief informed one of his officers that the mayor would be filing a complaint against Sylvia. When the officer’s investigation went nowhere, Alex Wright—a local attorney who carries commission with the city—took over the investigation. A month later, Wright had a warrant for Sylvia’s arrest and, bypassing the District Attorney, used it to force Sylvia to turn herself in and spend a day in jail. Because of the charge, Sylvia had her mugshot splashed across local media and her reputation dragged through the mud. But once the local district attorney got ahold of the case, he dismissed the charges.

Wright’s allegations of theft were only pretext.

It is clear that Sylvia’s speech and petition—not any desire to fairly enforce the law—drove the decision of the mayor, police chief, and special detective to have Sylvia arrested and jailed.

First, Sylvia was the biggest champion of the petition and wanted it to be presented before the city council. After all, the petition gave more force to her own judgment that the city manager was doing a bad job and had to go. Trying to steal the petition simply made no sense. A much more reasonable explanation—which the mayor originally agreed with—is that the papers between the mayor’s and Sylvia’s seats on the dais simply got comingled, and Sylvia picked them up by mistake.

Second, Sylvia was charged with tampering with government record, a misdemeanor. This charge is never used in situations like Sylvia’s. Through a public information request, the Institute for Justice examined 10 years worth of tampering charge data (both felonies and misdemeanors) provided by Bexar County, and found not a single instance of individuals charged for trying to steal something even remotely approximating a citizens’ petition. By far the largest chunk of the indictments involved accusations of either using or making fake government identification documents: altered driver’s licenses, another person’s ID, temporary identification cards, public safety permits, green cards, or social security numbers. A few others concerned the misuse of financial information, like writing of fake checks or stealing banking information. The rest are outliers, but all very different from Sylvia: hiding evidence of murder, cheating on a government-issued exam, or using a fake certificate of title.

Third, the city went to great lengths to ensure that Sylvia would be arrested for being charged with this non-violent misdemeanor. They did three distinct things to ensure this:

(a) they obtained a warrant, rather than summons. A warrant is generally used for violent criminals that need to be apprehended, while a summons is generally reserved for people suspected of nonviolent crime. Unlike warrants, summonses do not require being processed in jail;

(b) they circumvented the county prosecutor by using a procedure typically reserved for violent felonies or emergency situations and sent the warrant directly to a magistrate; and

(c) by using the procedure that circumvented the county prosecutor, they ensured that Sylvia would not be able to avoid jail. Because Sylvia’s warrant was not acquired through the traditional channels, it was not discoverable through the satellite office’s computer system, leaving Sylvia no option other than jail.

Fourth, the campaign of retaliation did not begin and end with the arrest. In addition, the city tried to remove Sylvia from her council seat based on an administration-of-oath technicality. A state court judge, when he heard of this, issued a temporary restraining order allowing Sylvia to keep her seat. (Ironically, the mayor had a similar issue with his swearing in, though no one argued that he should be removed from office.) In addition, Castle Hills residents aligned with the mayor sued Sylvia arguing that she was incompetent, using the trumped-up charge as evidence to support this claim. When the county district attorney learned about the lawsuit, he again declined to be a part of it, which lead the trial court to dismiss it.

The Constitution protects speech and prohibits government officials from retaliating against individuals like Sylvia who exercise their rights.

The First Amendment provides foundational rights in our democratic system. By safeguarding rights to speech and to petition the government, it ensures the right of all Americans to speak out and criticize the actions of the government and those who wield its power. Key to the First Amendment, the government cannot retaliate against someone for their speech. That means that government officials cannot take any actions that would chill speech—least of all by charging a person with a crime, having her jailed, and destroying her reputation.

Americans are becoming increasingly aware of the role courts play in holding officials accountable for illegal or unconstitutional actions, from the president to local police and prosecutors. Unfortunately, in many circumstances, the courts have held that government officials are immune, but that is beginning to change. In November 2020, the Institute for Justice argued a case at the Supreme Court that seeks to hold government officials accountable for beating an innocent college student because they unreasonably misidentified him as a fugitive. And a growing number of federal appeals courts have ruled that official immunity is not absolute: When officials flagrantly violate citizens’ rights, they can be held accountable in court.

Here, it is plain that the City of Castle Hills, Mayor Trevino, Chief Siemens, and Detective Wright accused, investigated, and charged Sylvia with an obscure and ill-fitting crime and ensured that she would end up in jail, all because she spoke out against the city manager. That’s unconstitutional. So, the Institute for Justice is partnering with Sylvia to vindicate her constitutional rights. The lawsuit is part of IJ’s Project on Immunity and Accountability, which is devoted to the simple idea that government officials are not above the law; if citizens must follow the law, then government must follow the Constitution.

Castle Hills Retaliation Rev. John S. Udo-Okon at Word of Life International Church in the Bronx When wealthy Americans face legal troubles, they have a lot of sources of advice. Legions of lawyers, business… 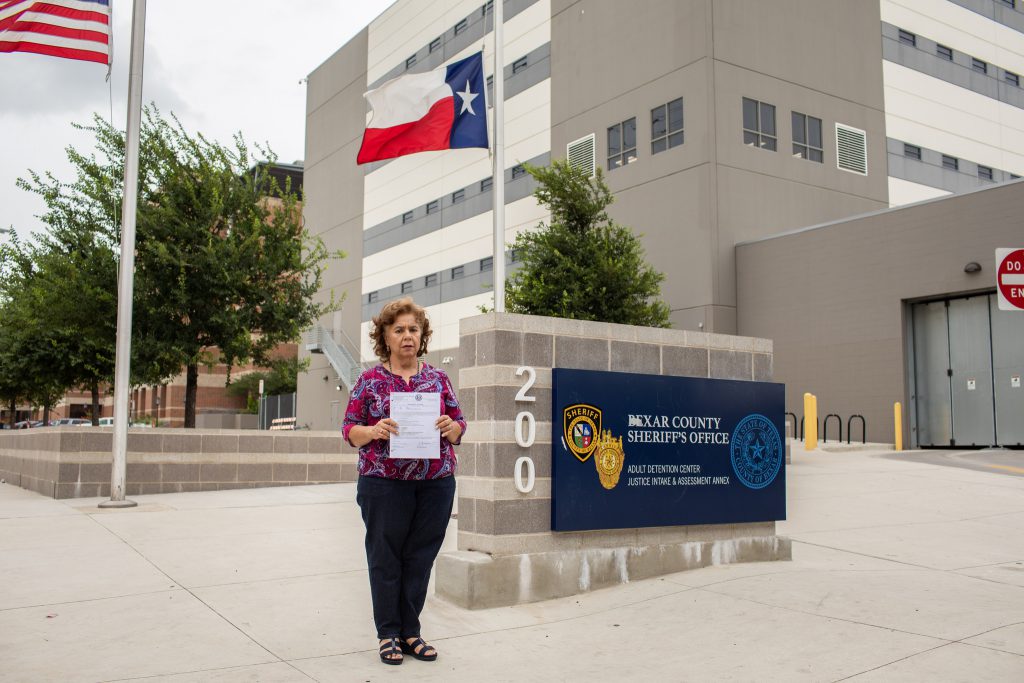